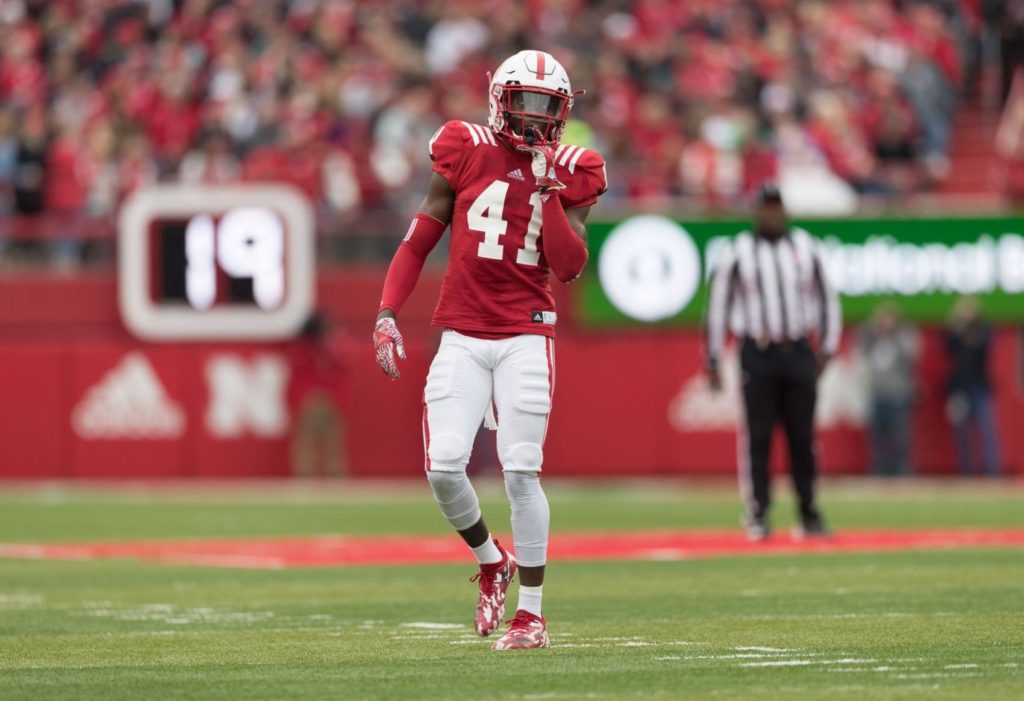 LINCOLN — When Roosevelt Williams wants to put his son through a tough workout, he’ll take him to the beach in Miami. The summer heat and sand fit the bill. And maybe, at some point, son Deontai might just say he’s better than his father was at that age. The 2.0 version.

“I’ll tell him all the time: OK, line it up,” Roosevelt said, laughing.

And he sees in Deontai, a junior safety at Nebraska, what Deontai sees in himself.

That knack for making plays — which Deontai turned into two interceptions and two forced fumbles in limited snaps last season.

“He was doing stuff like that at 5 years old,” said Roosevelt, the defensive coordinator for ASA College in Miami. And the things Deontai can do now, Roosevelt said, can make him the No. 1 safety in the country.

“He’s aggressive, he’s football savvy, and the tenacity he has is second to none,” Roosevelt said. “I was fortunate enough to play in the league, so he has it in his bloodline, but he’s more aggressive than me. I’ll say that. Yeah.

“He likes to hit. I’d hit you if I have to, I’d lock you down if I have to, but he’s reckless. He enjoys putting his pads on people.”

No one would argue within the walls of Memorial Stadium. Deontai Williams once called himself a sniper — only sort of as a joke — because when he hits a ball carrier, the collision is sudden, violent and, generally, the end of the play. Williams’ style ends sentences with exclamation points. His 6-foot, 200-pound frame — he’d like to get to 210 — tests well in winter conditioning, he said, and he prepares by doing extra ball drills and running hash to hash. That’s the kind of skill a safety needs to have if he wants to erase receivers on the opposite side of the field.

Yet Williams said Wednesday that he was “robotic” last season, even as he went 100 miles per hour and logged 23 tackles in 12 games. He didn’t know the defense well enough, which meant he either wasn’t as aggressive as he wanted to be and thought about his assignment or he freelanced, guessing instead of knowing.

Defensive backs coach Travis Fisher has been frank in multiple interviews that Williams was talented enough as a sophomore to be a Day 1 starter. But he didn’t always score well on pregame tests — which limited some of his snaps — and he played behind three less athletic but more seasoned seniors.

“When your number’s called, be ready,” Roosevelt said. “And he was. It was a good, humbling experience.”

He and junior Marquel Dismuke are the veterans while redshirt freshmen Cam’ron Jones and CJ Smith learn and sophomore Cam Taylor bounces among safety, nickel and corner. Deontai’s play this spring, he said, is “10 times better” than last spring.

The combination of speed and savvy is what Nebraska wanted when it coaxed Williams away from SEC country out of Jones County (Mississippi) Junior College. Williams, a Jacksonville native and lifelong Florida fan, planned on playing for the nearby Gators until coach Jim McElwain was fired.

Williams decommitted from Florida upon the hiring of Dan Mullen. Simultaneously, Nebraska’s new coaches started recruiting for the Huskers. Fisher found out Deontai was Roosevelt’s son — Fisher and Roosevelt Williams were part of the same NFL draft class — and immediately wanted the younger Williams on campus.

Deontai was about to take an official visit elsewhere when Fisher called Roosevelt.

“Don’t let Deontai get on that plane,” Roosevelt Williams said Fisher told him.

A visit to Nebraska happened instead. For Deontai, it all clicked.

Well, save the weather.

Deontai Williams can’t wear slides or sandals or shorts. Too cold, too much snow.

“I always have to look like a grizzly bear,” he said.

But summer is coming, and that’s when Deontai heads back to Florida and works with his dad in the sand. Roosevelt loves those workouts and he won’t hesitate to talk up his son, either.

“He’s a good football player, man, and, most of all, he’s a great kid,” Roosevelt said.